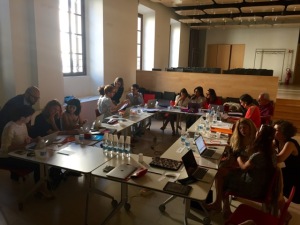 The day opened with a summary of the work undertaken in the last few months. Various requests for the development of new functions have been submitted to Foucauld Pérotin. Two versions of the database are now available: offline and online. The necessity to constantly use the online version was emphasised, except in the cases when no internet access is available. The system of links, which is already active, will be further improved over the following weeks. The test phase began on 28th April (with data being inserted by Orsetta Baroncelli, Marco Cavietti, Giulia Veneziano, Huub van der Linden, Élodie Oriol), which was a crucial step enabling initial feedback. This phase was concluded with the workshop.

The use of this simple and functional database is simplified by a manual and tutorial prepared by Michela Berti. Michela is also planning to create short videos to demonstrate how the work is carried out in a practical context. 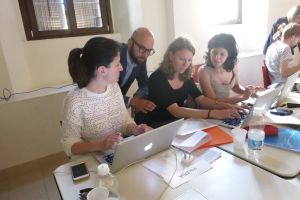 After the presentation of the system of links, an exercise on an archival document was suggested, dividing the participants into groups of 3 people. Each group produced a summary sheet describing the document in question, and successively selected the various links (people, places, events) associated with the information on the sheet. In the afternoon, a conference by Orsetta Baroncelli and Marco Cavietti illustrated the process of formation and preservation of administrative documents in the archives of Roman families by cross-referencing archival data and information coming from seventeenth-century treatises specifically concerned with the figure of the Maestro di casa.

On 19th May 2017 the first PerformArt Scientific Seminar: comparing perspectives took place in the Conference Room of the École Française de Rome and was open to the public. As highlighted by Anne-Madeleine Goulet, the concept behind the seminars, including those to be organised in future, is to present an exchange of ideas over the numerous subjects of the PerformArt project between scholars of the highest calibre. These Seminars are aimed at encouraging dialogue among the researchers in the project, as well as scholars and personalities whose research activity is of interest within the scope of the project. This implies that each researcher has the possibility of widening his field of interest by organising a seminar. 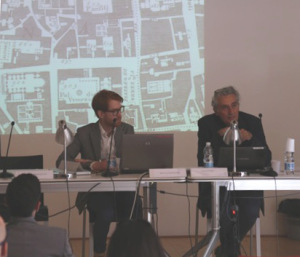 The seminar on 19th May, organised by Huub van der Linden, was aimed at exploring the interweaving of the “historical output” of places through actions and rituals, and Rome in the baroque era understood as a historical space and a musical landscape. As part of the Seminar, a conference was held from 9.30 until 12 by Angelo Torre (Università del Piemonte Orientale “A. Avogadro”) entitled Locality output: questions and perspectives for historical analysis. Torre is amongst the Italian scholars who have most contributed to this research field in the last few years. 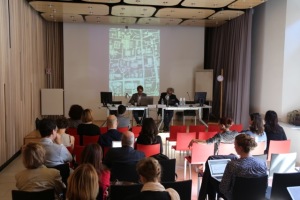 In his conference, Torre explained which questions the concept of locality output has resolved in his own studies: he described how locality output is capable of resolving uncertainties in Italian micro-history, clarified what implications locality output may have for research and finally proposed some possible applications. Moreover, the speaker highlighted an important observation by Laurie Nussdorfer according to which space is not a geographical by a judicial category. Torre explored the concept of of “ritual” and the concept of a culture of “possession” which is demonstrated through one’s actions and explains how a logic of “possession” influences the political and judicial world. He went on to illustrate the long-lasting debate discussing over the transparency or non-transparency of archival documents. Regarding the key term of the conference, “locality”, Torre is convinced that it produces sources, and that locality is something that is produced and constructed and should be carefully protected. Torre suggests that locality should be conceived as a separate concept to that of community. In fact, according to him locality is in opposition to the idea of community. Finally, he emphasises that the concept of locality has implications such as, for example, locality and space not being the same thing due to the discontinuity of the latter. Locality is in fact intended as a specific construction. Another implication according to Torre would be that the action creates the context, rather than the context creating the action. At the end of the conference various members of the audience put forward questions, for example regarding the concept of sound landscape and with what final objective and method it should be studied. Important questions and observations were made on the sound boundary, on the different sounds that may arise in an urban space, especially that of Rome, as well as regarding the relationship between the sound landscape and music. The morning was concluded with an enjoyable lunch at Grappolo d’Oro, which was aptly located in Piazza della Cancelleria.

On 19th May, the second day of the II seminar of the PerformArt project, featuring the testing of the database and a lecture by Prof. Angelo Torre, the research team had the opportunity of visiting Palazzo Colonna in Rome, thus forging a connection with the residence of one of the noble Roman families which are the object of research within the project. 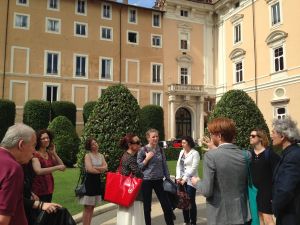 The visit was led by Huub van der Linden with spontaneous contributions from Valeria de Lucca, who has been studying the Colonna family for a long time. Like a journey in a time machine of sorts, this visit was extremely interesting and useful for contextualising the research of the team within the places where a Roman family lived and exercised its function as patron of the performing arts. First of all, when entering from the main entrance in Piazza SS. Apostoli, the team lingered in the great courtyard for a brief description of the palace and the history of the family, and subsequently moved to the interior of the sumptuous building in order to visit the central wing on the ground floor which is connected through the “sala delle feste” to the “palazzina Della Rovere”.  Here the team visited the apartment now known as “della principessa Isabelle” (at the time it was the summer apartment of Lorenzo Onofrio Colonna and Maria Mancini). 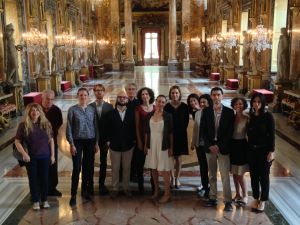 The original furnishings and collections of paintings from the most esteemed painters of the time caused great enthusiasm and astonishment within the research team. It is an immense heritage which is perfectly preserved and carefully maintained. Before climbing to the “piano nobile” of the central wing we were given the opportunity to cross the spacious enclosed garden and then progress to the next floor. Here, by passing through the chapel, chambers and anti-chambers which at the time formed the double apartment of Lorenzo Onofrio Colonna and Maria Mancini (such as the “sala gialla”, the “sala dell’arazzo”, the “sala dei ricami”, sala dei primitivi, sala del trono) we arrived at the majestic gallery, full of paintings, precious objects and old mirrors. This was a perfect conclusion to two days of intense work.