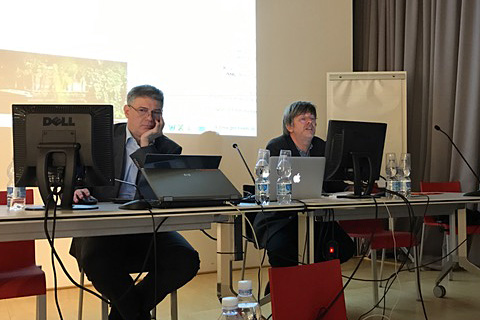 Laurent Guillo opened the meeting by presenting the target for the database: “PerformArt: allowing inter-connection between profiles about people, works (intended mainly as musical or literary compositions) and events. He stressed the importance of adapting to international standards on the compiling of indices and thesauruses (in our case these are managed by the GINCO system, which adopts an ISO standard).

Next, word was given to Foucauld Pérotin, the technician who has built the PerformArt database using “4D” software in collaboration with Anne-Madeleine Goulet acting as academic coordinator. Pérotin described the principal types of profiles (people, works and events) and the way in which it will be possible to inter-connect them. The database mechanism is aimed at facilitating researchers’ work at every step: options to work online or offline; capacity for graphic diversification of the text; image processing and upload of files in any format (PDF or other). In order to achieve such a result it was clearly necessary to foresee various issues or situations (for example, the option of working from a photograph is due to the fact that often archivists do not have time to transcribe documents in situ; the option to input data offline was taken into consideration because various archives and libraries do not have an internet connection). On several occasions the importance of working online was stressed, so that the uploaded data may be immediately integrated into the database. In fact, in case of working offline, the difficulty will lie in merging data with existing data on the same subject. The operation would require a long time because it would be necessary to check each individual piece of data in order to avoid duplication in the indices or redundancies within a profile.

One of the strengths of the database is interoperability, allowing access to the same profile for multiple contributors. This choice derives from the conviction that this is the sole means of reconstructing the complexity of artistic and musical life in the Roman environment in the period 1640-1750. This has inevitably raised a series of issues:

Archivists Orsetta Baroncelli and Marco Cavietti gave the third presentation of the day, illustrating principles for the transcription of manuscript documents, for which they are both representatives. They remain available to members of the research team in order to clarify any doubts or particular issues that may arise during the course of the research. Concerning the transcription of printed texts, it has been established that they will be transcribed according to different principles which are specifically intended for this type of documents.