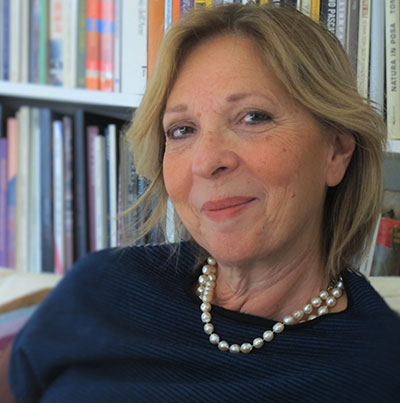 Following a degree in Philosophy (1975) she has been the author of radio plays on historical subjects and has collaborated with the chair of History of theatre and performing arts at the University of Rome La Sapienza. Her thesis The death of Theatre in Hegel’s aesthetics was published in Writings in honour of Giovanni Macchia (Milan, Mondadori, 1983). Her thesis for her specialisation in Librarian Science at the Vatican Apostolic Library, entitled The libretti of operas and dances in the 18th century. Ferraioli collection, has also been published by Olschki with the support of the National Research Council.

From 1981 to 2015 she worked at the Archivio Storico Capitolino as a historical archivist. She was responsible for the Ancient Archives section and, in particular, she has been responsible for the reordering, inventory and promotion of the documentary collections of ancient Roman families. She has written various articles on the topic. In order to promote the treasures preserved in the archives for a general audience as well, she has participated in the organisation of some exhibitions on Roman spectacles: The Great Theatre of marvels: venues, machines, stage sets in Rome during the Baroque Era, Rome, Chiesa Grande di San Michele a Ripa, 1985;“Sogni e favole io fingo”. Spectacle in Rome at the time of Metastasio, Rome, Palazzo Venezia, 1985; Theatre and Feast. Spectacle in Rome: Papacy and Revolution, Rome, Museo Napoleonico, 1989.

According to the Archivio Storico Capitolino’s policy of safeguarding and promotion of the family archives, she has overseen the acquisition of the Sacchetti archive, which the family donated to the Municipality of Rome. She is a member of the Accademia Etrusca in Cortona, of the Società Romana di Storia Patria, as well as the Circolo dei Romanisti, an ancient confraternity of lovers of the history of Rome. In 2002 she gave lectures in Archival Administration at the Columbia University in New York as a fellow of the Italian Academy. Her publications arise primarily from her work as an archivist. Through rigorous analysis of documentary sources she has reconstructed and revisited the vicissitudes of characters of the Italian Renaissance that traditional historiography had fictionalised and artificially constructed, such as Beatrice Cenci (Beatrice Cenci. The History, the Myth, Rome, Viella 1999) and more recently Isabella de’ Medici (Isabella de’ Medici’s lost honour, Garzanti 2011). The former of these two works arose from the reordering and inventory of the Cenci Maccarani archive and the latter from the reordering and inventory of the Orsini archive.

In 2008 she published the Giornale di viaggio of Giacomo Savorgnan de Brazza, brother of Pietro, the famous explorer. The Giornale, together with many photographs, emerged during the re-organisation of the Savorgnan de Brazza archives. In 2013 she collaborated with the Italian Embassy in Congo for an exhibition on the explorer Pietro di Brazza. In 2013 she was also invited to the Literature Festival in Mantua to speak on her work in family archives. Her latest book The Orsini archives: family, history and inventory is soon to be published with Viella. She currently teaches a course on Special Archival Science dedicated to family archives at the School of the State Archive of Rome.